We went to speak to people who were discharged from St George's Hospital via their Departure Lounge. Read our report about what people told us and what the hospital will be doing about our recommendations.

The Discharge Lounge at St George's Hospital is mainly for inpatients who are being discharged and about 22 patients pass through lounge per day.

According to St George’s Hospital the purpose of a separate departure lounge is to:

• Enhance the quality of the patient journey by providing a safe and comfortable environment for patients to wait for medications, transport or family members.
• To free up inpatient beds as early as possible.
• To assist the Trust in meeting local and government targets.

Discharge from hospital is frequently highlighted as an area of concern for local people who often tell us of experiences of difficulties during the process of being discharged from hospital. It was also mentioned by local people we surveyed about what our priorities should be in 2019-20. This work relates to two of our priority themes for this year; co-ordination of care for vulnerable residents and access to information to manage health.

We defined the following objectives for our visits:
1) To understand from a patient’s perspective what works well and what works less well in the organisation and information given during the discharge process via the departure lounge.
2) To observe how people’s comfort is catered for in the departure lounge.
3) To understand how long someone might wait for discharge.
4) If people have information to manage when they leave hospital (for patients and carers).

• Overall, most people felt that they had been adequately prepared for discharge, and that where appropriate their family/carers had been sufficiently involved in planning.

• Apart from delays in leaving, there were no complaints from patients about their time in the Discharge Lounge. People felt comfortable, and were complimentary about the nursing staff, who they found friendly and welcoming.

• Two–thirds of people had their discharge confirmed on the same day, although most had been advised (accurately) in advance of the probable date.

• Seven people expressed remaining concerns about going home, either about their condition or treatment or adaptations they felt were needed at home.

• Over half of the participants said that a staff member on the ward had gone through their discharge summary with them, but the rest were unaware of being helped in this way.

• A few people we spoke to had more complex clinical conditions than were usual in our participants; two had experienced several changes to their estimated discharge date, which had caused them and their families some anxiety. At the time of discharge, two people were still unsure about the outcome of discussions with social services about their domiciliary care packages.

• The majority reported that they had a date for a follow-up appointment.

• The majority had not been given a leaflet on the wards with information about discharge. (We understand that the hospital is currently reviewing its approach to providing a discharge leaflet.)

We have shared our findings with the people who manage and run Departure Lounge.

St George's Hospital Trust have provided a reponse, including planned actions. You can read both our report and their action plan by downloading them below.

We will be following up progress directly with the people managing the service and via a regular Care Quality Review Meeting we attend that involves those who are involved in monitoring the quality of services at the hospital.

You can help make health and care services better by sharing your experiences and ideas. 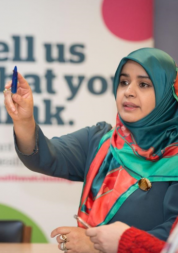 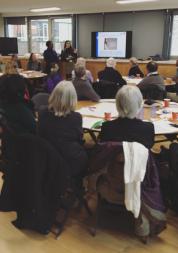